Rave reviews for SheRide on TripAdvisor.com 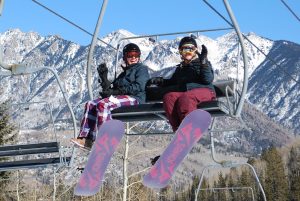 “I rode a double black diamond 🙂 Oh yeah, go me! I NEVER would have felt confident enough to try that if I hadn’t done She Ride!” -Suzanne Heller, CO

“SheRide was a rare opportunity to conquer some of life’s fears, and celebrate triumphs in an atmosphere of support and generosity.” -Sandy Mckeon, MD

“The most fun I’ve had for three consecutive days in as long as I can remember!” -Leslie Luben, NM

“After SheRide I felt like anything was possible in my life”! -Carol Gilmartin, WA

“Working and playing with an all girl team was both exhilarating and fun.” -Leslie Klaasen, TX

“It provided the confidence I needed to overcome my fear and have a good time doing it.” -Sarah Gelb, CO

“The women instructors were friendly and understanding while being that extra push that I needed.” -Amy Steindler, VA

“This weekend I did my personal best and kicked ass! I rode the box, landed my jumps, attacked the steeps, shredded the bumps, and learned some cool tricks to impress the boys. Wow now that is something to be proud of and I achieved all that because of the environment you and the coaches created for me.” – Amy Barreli, Phoenix AZ